This year's graduates from Gray's School of Art in Aberdeen offer enthusiastic approaches to issues of home, changing landscapes and the fraught political climate

There’s a frenetic energy at this year's Gray’s School of Art Degree Show, perhaps heightened by the fact that our visit comes just before the works go on public view. It is a real privilege to be shown around as conversations of prizes won and degree grades earned can be overheard round the corners of many spaces. The class of 2019 seem to be keen to impress, resulting in a show that at times errs on the side of overwhelming, with spaces divided by a jigsaw of coloured floors and stuffed full of works, and a certain focus lost to spectacle. However, there are some outstanding examples of thematic precision around cultural, national and queer identities alongside intelligent timely explorations of environmental concerns.

In the rather cramped and not-so-well-signposted portacabins at the back of the school, Meg Miller presents a reflective collection of works drawing upon her experiences as an apiarist. At the centre of her meditatively lit space is a fully working glass and wooden beehive placed alongside a collection of objects made in collaboration with these bees, subtle celebrations of their vital and intelligent labour.

Geological forms, sites and materials are explored by a number of artists working in sculpture this year. Kristina Abburow presents salt samples collected from various coastal areas of Scotland alongside a haunting dress encrusted in salt crystals after months of being embalmed in sea water. Emanuela Agnoni’s boulder-like forms inset with voids speak to a fascination with primordial timescales, and entering her largest piece, Temple, allowed for a greatly appreciated moment of stillness as the sounds of the show were temporarily muffled.

Aberdeen has seen rapid urban change in the past few years as the citywide redevelopment masterplan is implemented, so Duncan Boyne’s impressive large-scale paintings of its derelict sites feel particularly poignant. Space, and access to it, is a contentious issue within the North East’s cultural sector and one can’t help but feel disappointment at the isolation Boyne imbeds in these pieces. Kirsty-Maree Gunn turns her focus to the poetic invisible energy of non-places, with clouds of pastel mark-making scrawled across glass cupboard doors and a window inset into her space. It is as if all the years of navigation of these sites have been evidenced, their gestures frozen. 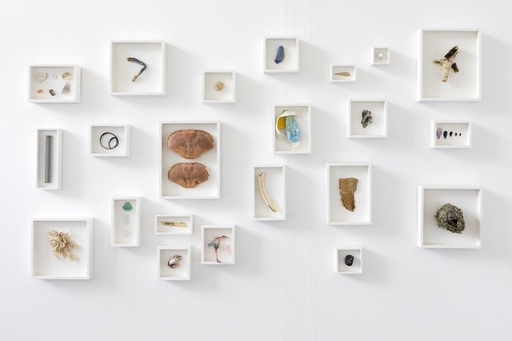 Sofia Tagor and Joseph Buhat both address the complexity distance places upon relating to cultural and national identities in their works, presenting two of the standout bodies of work in the degree show. Tagor’s paintings of childhood memories from Russia are projected over footage from her home country, but it is her video My SKY(pe) Life which sings with clarity. Documenting her relationships split between her home country and Scotland, beautiful quiet moments such as the family cat resting at an apartment window or a video from a sleepover in 2011 are enfolded with the searing and tense geopolitical realities of watching news coverage of the Salisbury nerve agent attack. We only wish that there was more emphasis on the placement of this work, rather than it being shown on a relatively small screen with only two headphones.

Across several tightly composed paintings of anonymous figures Buhat explores the rituals of his Philippine heritage. Utilising a vibrant palette of flat colours interwoven with immediate mark-making, the particularly strong work Pukpok Tuli depicts the back of a boy bent down as a violently rendered red figure performs the boy's public circumcision, feet gathered at the edge of the canvas.

Figurative work is resurgent among the painters this year, and Andrew McCallum blends an interest in historical portraiture with a queer sensibility in a series of works which celebrate a sumptuous camp opulence. Two models painted as ogres in green and purple, a lace of pearls wrapped between the two, is particularly strong. In the next space, Jayne Fiskin similarly looks to art history to explore moments of feminine strength. Her take on the beheading of Holofernes by Judith in collage draws a smile, particularly Holofernes' limp paper hand slumped just off the canvas.

Digital silk prints are a bit of a degree show cliché at this point, but in Jacob Hoffman’s work silk is, for once, an appropriate choice. An image of a luxuriously presented silk bow is belied by the difficult nature of working with the fabric, frayed raw edges slumping down to the floor. It forms the largest piece in his research around the classic men’s suit, and the sensuality of becoming a character through the process of measuring, fitting and styling one.

Editing down a presentation of work is a challenging process, and although at times this year's show feels claustrophobic with the amount of work on show, it is exciting to see the sheer enthusiasm of this year's cohort to tackle complex subject matter. Perhaps borne out of the political climate we find ourselves in, these artists feel primed to take it on.