The School of Fine Art final year students have been busy. Their dedication and hard work is clear to see in this year’s highly anticipated Degree Show, the first in the Stow Building for three years. Across the disciplines there are interrogations of ways of making, process and material, as well as a questioning approach to the world, resulting in work that is open, innovative and exciting.

In Sculpture and Environmental Art, Zane Drees takes life in the post-digital age as his subject-matter, using methods and materials such as hand-carving, weaving and quilting to demonstrate a rejection of modern technologies. Yet, used as a tool to ground and reflect on his own life, the work evokes contradictory feelings. While critical, he is – like the rest of us – dependent on modern technology. The viewer experiences feelings of intimacy and fear, humour and discomfort: the ambiguities of modern life, a domestic surrealism. Cydney Lovett-Downey’s Super 8 collage film And Once He Used To Love Me is constructed from found home movies and is an eerie, dreamy, compassionate meditation on the passing of time and the human experience. There is a double sense of loss: we grieve for the figures who exist only on spools of film, but also the loss of an art form – a ‘video rendered requiem’.

Angus Rushin’s work centres on the narrative encapsulated in the grain of trees. Symbols of Loss is an invocation to celebrate and memorialise Glasgow’s ash tree population, which currently faces extinction. Where the saw is used as a ‘biographer of the material’, the archiving of the grain of the wood serves to materialise the memory and life of the tree. Joseph Weisberg’s ongoing project Mounds consists of the documentation and installation of urban, suburban, and rural piles of used, to-be used, and unwanted piles of miscellaneous material. Weisberg shows an appreciation of their sculptural qualities and the 'covert creatives' – the people and machinery who make them – in an act of recognition for the overlooked in our surroundings.

An in-person exhibition also allows for interactive installations, such as Katie Curry’s The Head Massager (pictured below), where personal responsibility in the age of the internet is explored through the concept of action and unknown consequence. This is brought into the physical realm, as the person in control of the head massager (the action) cannot see the results of their actions (the consequence). The objects in Rosa Gally’s installation embody her questioning of how functional objects are appreciated, by playing on the contradictions of functional objects in a gallery setting. Failing to Serve explores ideas of imperfection, the process of making, and whether meaning is static or always changing. 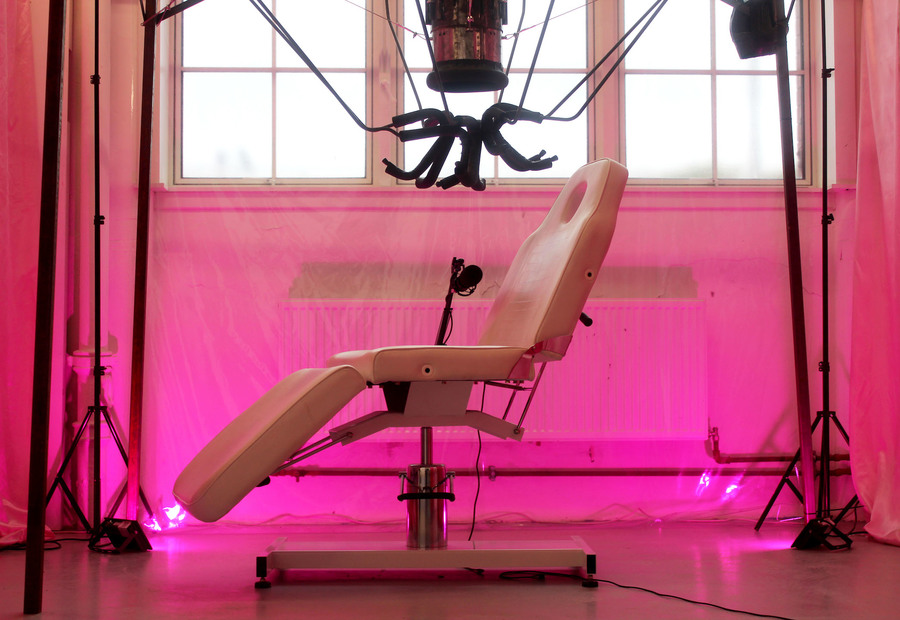 Painting and Printmaking student Sasha Ballon’s experience working as a tree surgeon is important in her practice. Recycled wood from job sites is combined with chainsaw woodcarving, welding and weaving in her exploration of craft as a site of resistance. The work is inherently queer in its potential to upend categorical ways of making, and critique of gendered stereotypes in trades and craft. Expect a collage of moving image, sculpture and textiles, with live performances on preview night and the evening of 1 June.

Josie Swift’s installation HARLING is an exploration of modern Scottish mythology, via a pebbledash sofa and video in which Swift and women from her hometown recite her poem to the ‘gods’ of harling (Scots for pebbledash). Drawing on the physical make-up of homes and common generational memories of spending hours on YouTube, it’s dedicated to "the women of the community I grew up in, an ode to the women that birthed our generation."

Nancy Pilkington works with painting and objects, which she uses to imagine an ‘exit from linear time and logic’ within the setting of the child’s den – a shape-shifting place where creative repair is possible. You are invited to take shelter in this refuge from conflict and aggression. James Johnson expands print and image making into sound and sculptural installations, where the idea of print emitting sound has led him to create hybrid stretcher sound systems. The work comes from a combination of physical material experimentation and digital image sampling. Johnson is interested in spaces and feelings that are in limbo, between states – a notion which emerges in his subject matter and material.

Through the process of documentation, restoration and reproduction of family photographs of her mother and grandmother, Chloe Beddow finds a physical material connection to her grandmother, whom she never met, articulating the passing of time. The imagery in Finn Robinson’s paintings comes together in a collage of personal experience, online culture and art history, where his identity is appropriated and imitated. Intensely personal, his work represents an attempt to finally make sense of his identity, after the 'facade of fear and second-guessing' forced upon him by small town mentalities when he was growing up between small towns in the north of Scotland. In his paintings this cathartic process of unravelling plays out, and emerging narratives spiral across the canvases.

In Fine Art Photography, Nora Mackenzie’s work also conveys themes of memory, as well as the fragility of time, change and the marks we leave behind. In a world where everything is constantly changing, Nora captures scenes that are remnants of the past. While there is a physical absence of people in her photographs, their traces are made known through chalk scratchings made by kids on a winter’s day, or an old football shirt tied to a fence to remember a loved one. Loud Hand by Kaya Erdinç attempts to document an intimate collaboration with philosopher Bibi Straatman, with whom Kaya closely read several texts from the Christian mystical tradition. Her work includes a silent portrait moving image shot on Super 8 film, accompanied by a long prose poem.

Within his exhibition space, Louis Syed-Anderson has constructed and curated his own floor-based landscape, as well as spatially engaging with the physical architecture of the exhibition space. Influenced by the architectural structures and materials of the urban landscape, his designs emulate the experience of navigating through those spaces, echoing both the contours and structural forms of the urban environment.

Megan Auld’s work Burning Dust centres on the history of women in the industrial age in Scotland. Her work references the volatile landscape through a range of materials and objects, revealing the labour-intensive and fatal past of factory workers. Also utilising a myriad of materials is Spencer Dent, whose work explores the concept of genderlessness. A series of self portraits use costume and make-up to distort the body and figure, screen prints and sculpture depict a genderless figure, and weaving reflects make-up design processes.

The School of Fine Art Degree Show runs 1-12 June in the Stow Building, 64 Shamrock Street, Glasgow. It is also available to view online at gsashowcase.net